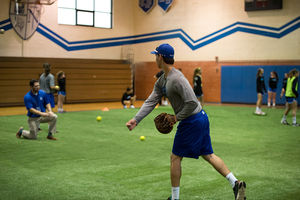 (FORT WORTH, Tex.) – The sports industry, as we know it, is about to change.

The high-grade, technological advancement transforms the way millions of athletes train and compete year-round. The first of its kind, GymTurf 365 turns any building into a baseball, football, field hockey, lacrosse, soccer or softball practice field in minutes. With this new product, one will never have training interrupted because of climate or scheduling issues.

"GymTurf 365 is a game changer for the sports industry, allowing coaches to maximize time with athletes regardless of weather or field availability challenges," says Dave Rossi, Dollamur Senior Vice President. “Our goal in developing GymTurf 365 was to offer an indoor alternative where athletes could perform a full practice and compete at the same level as they would outdoors.”

One of the most exciting aspects about GymTurf 365 is the number of athletes who can benefit from it. Unfortunately, equipment can be expensive and in many cases it is only used by a few athletes. In the case of GymTurf 365, there are at least eight sports that can train or compete on the surface in addition to physical education classes and sports camps.

Taking less than 30 minutes to install, GymTurf 365 features Dollamur’s Flexi-Connect™ technology, a hassle-free integrated feature that connects turf sections without additional fasteners or tape. The patented system, which uses built-in hook and loop connections to join turf rolls, expedites set-up and tear down. It ensures the turf will not separate between seams for a “no slip, just grip” surface.

Another great feature of GymTurf 365 is that it requires no messy infill. The low-blade tufted turf performs without the need for messy infill. Players can wear short turf cleats or regular athletic footwear and will still experience the traction they need to perform at their best.

"Partnering with Dollamur has led to us crafting a cutting-edge product that serves a massive need in the sports industry," says Dr. Phil Stricklen, Director of Research and Development for Shaw Sports Turf. “Teams that have the ability to practice indoor will have a definitive advantage during periods of bad weather.”
GymTurf 365 meets international soccer standards for artificial surfaces and provides a true bounce. This also enables baseball, field hockey, lacrosse and softball teams to use official balls indoor and replicate an outdoor field. The low impact, anti-abrasive flooring is engineered to reduce impact and allows teams to train year-round at the same full-intensity as an outdoor session. 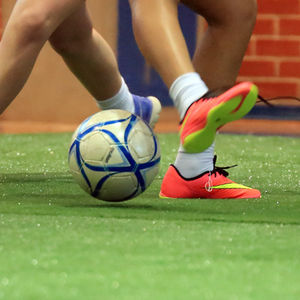 Headquartered in Fort Worth, Tex., Dollamur has official partnerships with USA Wrestling, USA Judo, the Atlantic Coast Conference, North American Grappling Association and 12 state high school wrestling championships, among others. Dollamur surfaces can be found in professional, intercollegiate and military facilities nationwide. It supplies mats to 130-plus UFC Gyms across the U.S. and more than 300 sports events annually, including the CrossFit Games.

About Dollamur Sport Surfaces
Based in Fort Worth, Texas and established in 1996, Dollamur Sport Surfaces is the leading global manufacturer and distributor of high-performance competitive sports flooring for wrestling, martial arts, MMA, CrossFit, gymnastics, cheerleading and other activities. Dollamur mats are the preferred choice in hundreds of top-level sporting competitions each year throughout the United States, Canada, Europe, Africa, South America, Asia and the Middle East, including many national championships and Olympic-qualifying tournaments.

About Shaw Sports Turf
Shaw Sports Turf is one of the leading synthetic turf companies in North America. It has demonstrated industry leadership in both quality and innovation for more than two decades with over 2,000 successful installations, and an impressive list of high-profile installations, including the Baltimore Ravens, Cleveland Browns, Georgia Tech, University of Arkansas and many others. Engineered for performance and safety, Shaw Sports Turf features a product line designed specifically to meet the needs of athletes and sports programs.