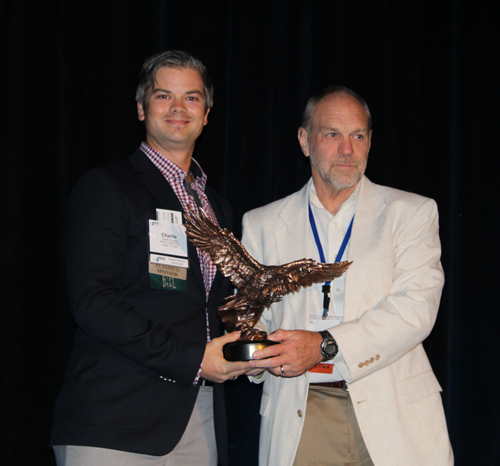 Glen Ellyn, IL USA (November 7, 2017) – The Association of Independent Manufacturers’ Representatives, Inc. (AIM/R) honored Scott Edwards – General Manager Component Foams of Armacell as their recipient of the 2017 Golden Eagle Award. The presentation was made before a record crowd at AIM/R’s 45th Annual Conference in Seattle, WA

The Golden Eagle Award is presented annually to an individual in the Manufacturing sector that demonstrates the highest level of professionalism in their interaction with Independent Manufacturer’s Representatives.  The award was presented by Charlie Parham, VP of Industry and PR for AIM/R.

The Association of Independent Manufacturers'/Representatives, Inc. (AIM/R) (Glen Ellyn, IL) is a trade association of independent sales representatives in the plumbing, HVAC/R, kitchen/bath, waterworks, irrigation and related industries. AIM/R promotes and improves the rep function through education, networking, communication and leadership, and its members are the top agencies in the industry.  For more information on AIM/R and its members, please contact Stacey Woldt at staceyw@cmservices.com or 630.942.6581.