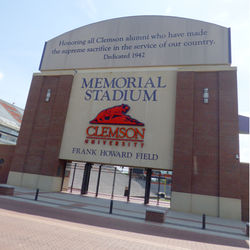 CHALLENGE: Insulate 50,000 feet of newly installed variable refrigerant piping at Memorial Stadium in time for the start of the 2015 football season. 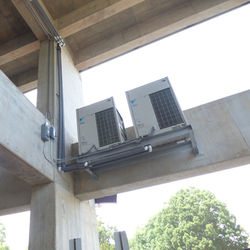 Many diehard Clemson fans would gladly sit on a wooden crate and cool themselves with a hand fan if they had to in order to watch a game at the legendary Memorial Stadium (a.k.a. Death Valley). Others demand a far more luxurious game day experience. For these more affluent fans and their guests, Clemson recently completed a 25 million dollar renovation to over 90 Luxury Suites and Club Seating spaces inside the stadium. The renovation included the implementation of a new variable refrigerant volume (VRV) system for razor sharp climate control in these spaces as well as press areas and coaches’ boxes.

Opting for VRV eliminated the need for massive amounts of bulky ductwork, but necessitated the need for over 50,000 feet of refrigerant piping, all of which had to be meticulously insulated. It was a challenging installation given the size, and the rigid time constraints imposed by Clemson’s first 2015 home game. The clock started ticking for Scott Hall, president of Dean Hall Insulation LLC in May 2015 as soon as the first VRV piping was installed.

“The biggest challenge with this project was the amount of piping that had to be insulated. At first, you can only insulate straight pipe. You can’t insulate any piping joints until the system is leak tested, otherwise the insulation could mask a leak. So from the very beginning it was test/insulate, test/insulate, until the entire system was complete,” said Hall.

Insulation is particularly critical in VRV systems (see sidebar on Variable Refrigerant Technology). In most cases, there are three sets of pipes that must be insulated, usually within a very small space or in an exposed area. In either case, the finished installation must be clean, compact and, most importantly, completely sealed to prevent any condensation or frost from forming on the pipe. 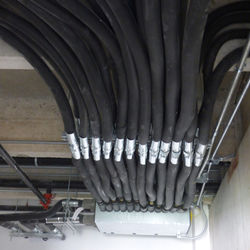 “Based on Armaflex’s performance characteristics, Daikin agreed that 1-inch Armaflex was a suitable solution for the entire VRF system,” said Gregory Hudson, mechanical designer and project manager at RMF Engineering of Charleston, SC, the firm that designed the VRV system for the stadium.

As is often the case with VRV systems, much of the pipe was exposed and space was at a premium. Aesthetically, bulky jacketed lengths of fiberglass pipe insulation were out of the question, another reason why Armaflex closed-cell elastomeric foam was chosen.

“Armaflex is the only choice for a system like this,” said Hall, who has installed many HVAC systems using Armaflex— Clemson Stadium being by far the largest VRV system his company has ever insulated.

“We had to be extra careful because if a joint or fitting isn’t perfectly sealed, condensation can form and it might run several hundred feet from the source. We had to make sure every square inch of the insulation was sealed at every seam, on every fitting, and every valve. You can’t have any condensation—period—or the system will fail.” 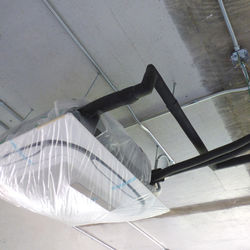 John Knox, project manager for Waldrop Mechanical Services of Spartanburg, SC, the contracting firm responsible for the mechanical upgrades at Clemson, shared in the “nail-biting” that comes with a project of this size and timeline. Knox has worked with Dean Hall Insulation on numerous projects over the years. One thing both firms always agree on when it comes to condensation control on HVAC piping is that Armaflex is their insulation of choice.

“I think it performs better and certainly holds up longer than other products. It has an extremely good [built-in] vapor barrier. That’s one of the downfalls of using fiberglass. It’s hard to achieve a good vapor barrier,” said Knox.

The VRV system at the stadium consists of approximately 187 fan coils or “cassettes,” 31 branch selectors, 16 outdoor condensing units and all connected piping. The condensing units are piped to the branch selector boxes located at various locations within the stadium. These units allow for maximum heat recovery within the system and essentially direct heat to the cassettes in the individual spaces or reject it back to the condensers. This makes it possible for the VRV system to provide simultaneous heating and cooling within the building.

“The system is really flexible in terms of what it can do,” explained Hudson. “It adapts to the load profile. We still have to do some amount of oversizing to handle the peak load, but the system adjusts to deliver the right amount of heating and cooling necessary.”

That’s especially fortunate in a football stadium application in South Carolina, where virtually anything goes between the months of September and December as far as outdoor temperature is concerned. 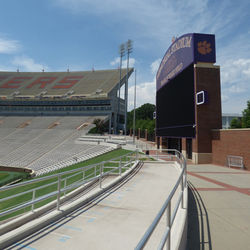 With all that flexibility comes the need for a lot of insulated piping. Waldrop was able to use bendable copper piping for much of the project, which allowed for a fast and simple slide-on application of Armaflex tube. Where rigid pipe and fittings were required, Dean Hall fabricated fittings as taught per Armacell’s Qualified Installer Program (AQIP). Since Armaflex has an extremely low permeability rating (0.05), there was no need for jacketing on interior applications. Approximately 20 percent of the piping is outside and was wrapped with a flexible cladding to protect it from weather, birds, etc. The end result was a clean, space-efficient installation that fit within the limited ceiling spaces and (when left exposed) was non-obtrusive. Most importantly it was installed on time.

“The insulation is doing its job. And we don’t have to be as concerned about it being crushed, which could hinder the performance of other materials. [Armaflex] holds it shape even if a pipe hanger gets missed,” said Hudson.

That’s good – because the only performance Clemson and its diehard fans want to be concerned with come game day is that of the team.

*Some VRV/VRF manufacturers cite a 250°F requirement for insulation for abnormal temporary situations when there is a problem with the system and repair is required. In this temporary situation, refrigerant may become superheated and reach temperatures up to 250°F before the unit shuts down automatically. The time that the refrigerant temperature would be above the upper use temperature of AP Armaflex would be minimal and likely less than 10 minutes.

AP Armaflex has been tested to ASTM C411, Standard Test Method for Hot-Surface Performance of High-Temperature Thermal Insulation, where it is subjected to 250°F for 96 hours. During this test, AP Armaflex shows no signs of sagging, surface cracking, warping, or de-lamination and the insulation remains flexible and easy to handle. In addition, there is no smoking, flaming, glowing or smoldering on the inner diameter of the insulation. Since ASTM C411 proves that AP Armaflex can handle 250°F for 96 hours, it can handle the short amount of time VRF or VRV refrigerant may be at 250°F during faulty, abnormal operation.