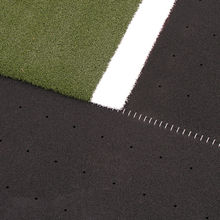 The following is an excerpt from Coaching Management-Football Magazine’s “Focus on Safety: Protecting your Players”

When synthetic turf replaced natural grass in the Houston Astrodome, it was laid directly on top of a concrete base, creating a very hard playing surface. This became a major concern, as one in five concussions occur when an athlete’s head hits the playing field. In response to this, Armacell created the ArmaSport® Turf Underlayment shock pad, which allows athletes to play on a safer, softer field instead of a synthetic turf field solely placed over concrete or asphalt. 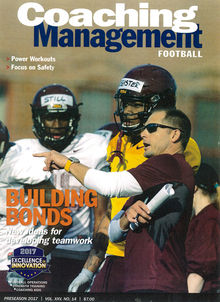 The ArmaSport Turf Underlayment pad (with or without optional drainage perforations) is installed and glued over a base of concrete, asphalt or crushed rock, allowing for the drainage of water. The pad is installed in individual rolls, which can either be sewn or taped together. Artificial turf is then placed over this new surface and either glued to the pad or laid down with the weight of the infill holding the turf in place.

When it comes to athletes, football players are some of the biggest and fastest, putting a large amount of pressure on their playing surfaces. When they cut, fall, and roll on a synthetic turf field, the infill moves. When this infill isn’t at the proper depth and athletes’ heads hit the turf, they will also be hitting the rock base below it. However, if an ArmaSport Turf Underlayment pad is installed, athletes will be protected from the rock base 100% of the time, over 100% of the field. Additionally, this padding not only protects the players when they fall, but also shields the bottom side of the turf from constantly rubbing against the rock base, extending the lifespan of the playing field. 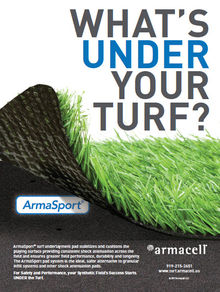 Many sports teams are currently utilizing the ArmaSport Turf Underlayment pad. The majority of the Top 25 NCAA Field Hockey Teams have installed Armacell’s ArmaSport TU2 underneath their playing surface, and programs like Howard University have placed TU2 under their football/soccer field. It is also being used in many arena football stadiums, as well as in Japanese baseball fields. The trend towards installing a pad on all playing fields is growing due to the extra safety it provides to not only football players, but all athletes, as well as the comfort it supplies owners in the durability of their projects.