Chapel Hill, NC – March 14, 2016 – Armacell is pleased to announce that its Dallas, Georgia plant has surpassed 1,000,000 hours of working safely without an OSHA lost-time injury. This significant safety milestone was accomplished after more than 13 years of incident-free work. 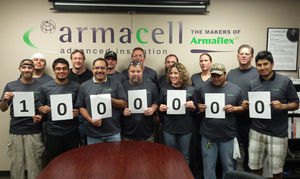 “At Armacell the safety of our co-workers is our first priority,” says Michael Heintzelman, Plant Manager of Armacell’s Dallas, Georgia facility. “We’re proud to say that we’ve had no lost time injuries in the plant since February 2003. This major milestone is due to the tremendous dedication of our teams.”

Armacell has many safety initiatives to ensure the well-being of the workers, including extensive training programs and behavior-based safety processes. For the last two years, Armacell has instituted World-class Armacell Mindset (WAM), a global initiative that involves extensive safety programs that are audited internally every year.

“At Armacell, we promote a culture of safety and believe every worker has the right to go home each day in the same condition as they arrived,” said Mike Fahsel, General Manager Manufacturing, Insulation Americas. “This achievement is the refection of the commitment of each of our employees to that safety goal.”

OSHA defines a lost time accident as a recordable incident in which an employee is not able to return to work on the day or shift following the incident.