Mebane, NC - June 2014 – For the majority of the Brazilian World Cup stadiums, Armaflex was the material of choice when it came to insulating refrigeration and air-conditioning installations. The elastomeric insulation material from the market leader Armacell was used in eight out of twelve venues.

Like many sports stadiums and multi-purpose arenas throughout the world, the new World Cup stadiums in Brazil relied primarily on products from Armacell when insulating refrigeration installations. In service and administration facilities, the highly flexible insulation material protects the chilled-water pipes and air ducts of the air conditioning systems against condensation and energy loss. While extensive renovations equipped six existing arenas for the championship, the six other stadiums were new construction. The sporting venues in which Armacell products were installed include the Estádio Nacional in Brasília, the second largest World Cup stadium with a capacity of over 70,000 seats, the magnificent Estádio Mineirão in Belo Horizonte and the Arena da Amazônia in Manaus, the most controversial and - from an architectural point of view - most unusual stadium of this World Cup. All in all, more than 150,000 linear feet of insulation tubes and nearly 50,000 square feet of sheet material were installed in eight World Cup stadiums and the Arena Grêmio in Porto Alegre, which was constructed at the same time. 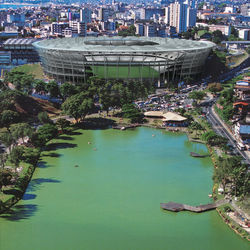 Armacell has been selling its products successfully in the South American market since the mid nineties and in 2003 the company opened its own production facilities in Brazil. At the Armacell plant in Pindamonhangaba (near São Paulo) technical insulation materials for the Mercosur region are manufactured.

ABOUT ARMACELL LLC: Armacell is a global innovator in foam technologies and the world leader in the market for flexible mechanical insulation materials.  Armacell produces Armaflex®, the most trusted brand in flexible, fiber-free mechanical insulation, as well as thermoplastic insulation materials, covering systems, noise control products and special foams for a multitude of applications. The Americas headquarters for Armacell LLC is located in Mebane, NC. For more information about Armacell and its products, visit the website at www.armacell.us.

(1) Always on the ball: Insulation materials made by Armacell were used in the Arena Fonte Nova in Salvador (Bahia). (Photo: FIFA)

(2) The Manaus World Cup arena in the tropical climate of the Amazon region is the venue for four group matches, including the top game England against Italy (Photo: FIFA)

Photos for editorial use only.